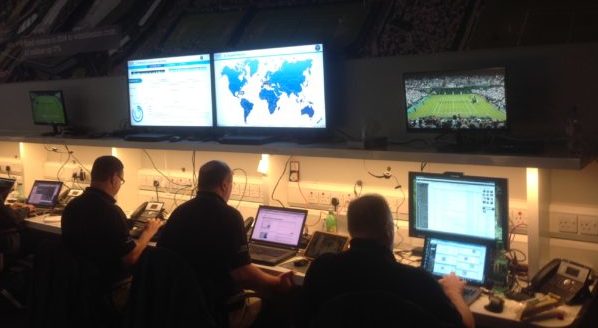 The Future Of Wimbledon and Sports Media

The Best Global Media Coverage at Wimbledon in 2017 and beyond will be going to the All England Lawn and Tennis Club (AELTC) in partnership with IBM.

They have been pioneering many new AI technologies to ensure they provide the best news and the fastest updates and figures to really engage tennis fans and continue to keep Wimbledon on track as the number one tennis tournament in the world.

Thanks to my personal brand and my prolific blogging and social media activities IBM invited me to Wimbledon in 2015 for a tour of the basement. I was astounded at the level of Tech they had in the Bunker beneath the courts.

At the time my personal brand was ideal for brand awareness around cognitive and AI, I explain it in a simple language that most people understand.

The complimentary strawberries and afternoon tea were delicious and I also had an interesting conversation with Chris Nott CTO from Wimbledon who actually pioneered the real-time updates for social media, by using the huge stores of data, IBM Watson and some other clever tech.

Wimbledon has embraced the cutting edge tech that IBM has designed and are using these solutions to engage people with content, much like Facebook does with your timeline, they are doing this to engage tennis fans to delight them.

“At the heart of Wimbledon’s technology are IBM’s cognitive solutions delivering the best insights and analysis possible to the AELTC to encourage great fan engagement,”

“Cognitive computing is the next revolution in sports technology and working with us, Wimbledon is exposed to the foremost frontier of what technology can do, as we work together to achieve the best possible outcome for the brand and the event. Cognitive is now pervasive from driving the fan experience, to providing efficiency for digital editors to IT operations.”

The Future of Wimbledon’s Broadcasting!

There is no doubt that the (AELTC) will take over from many of the other broadcasters globally and from the BBC but I think this will certainly be down to the delivery methods and the way pioneering technology can engage tennis fans.

When I attended the tech tour and saw the speed at which the social media updates were ready to go out I was certainly impressed, I also had a conversation with IBM Watson, which gave me all the information about any tennis related question I wanted in a language that I personally could understand VS a tennis pros answer which would have been very different. The answers to my questions came along in record time from Watson.

The differences between this year and 2015 is they have expanded the amount of data sources and expanded the real-time nature of the analytics to create more engagements, they have also begun to launch chatbots for directions so people can find their favourite restaurants when on-site and they are collecting data from the app downloads to improve for future years.

The videos snippets they will send out will be based upon the number of engagements that they have had when live, these snippets will be a true representative of the most popular content in pretty much real-time as they are taking into account social media data points, crowd noise level and other important indicators.

No publisher of content in the world will be able to keep up with this approach moving forwards. We will see what unfolds over the next few years and I for one am pleased that they have taken back the control of broadcasting their own content as it will benefit the fans, especially with 360-degree cameras and other fun media for the future.

This is a quote from Chris Nott’s blog during 2016 and I tend to agree it’s all about leveraging real-time data, social media, purchasing and weather data all play a part in engaging the fans.

“Since last year’s tournament, I have seen an increase in demand for real-time insight in numerous organizations. Maintaining a current, real-time view of what is happening in the business allows pertinent information to be pushed to those who need to act on it as events unfold. Such information might relate to key performance indicators, highlight a drop off in performance, or trigger and alert that something requires action. In all cases, the user knows something needs to be done now, rather than finding out after the event.

One application of such capabilities is in the prediction and prevention of equipment failures allowing component repair or replacement. This averts outages and leads to a better managed, more resilient service. Another is to optimise and personalise inbound marketing campaigns so that sales are increased and customer service improved during that customer interaction rather than understanding what opportunity you could have taken sometime later.” Quote Chris Nott IBM

The Future of Media Within Sports

We are all able to broadcast and to become our own media centre moving forwards this will become more of the norm. So leveraging this sort of technology moving forwards will become more commonplace, think about all the other sports in the world that can utilise this and the sponsorships it will create, leveraging all the data is hugely valuable and becoming a publisher of your own content is probably one of the best things that businesses and individuals can do, rather than relying on other media businesses and pr companies to promote your enterprise.

Here is an article that I wrote about my experience in 2015.
https://www.linkedin.com/pulse/wimbledon-2015-amazing-ibm-technology-behind-tennis-nathaniel