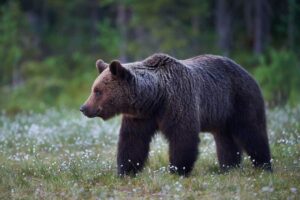 17-year-old girl saves dogs, shoves bear. Hailey Morinico recently saved her two dogs from an attacking bear by shoving it with all of her might. She is now being hailed as a hero for risking her life to save hers and those of the dogs. This brave young woman has shown us that sometimes we need “courage” in order to live a “happy, healthy life.”

The frightening incident was caught on home surveillance video on Memorial Day.

Hailey Morinico, 17, said she heard the family dogs barking in her backyard and saw a massive mama bear on a wall with her cubs.

Video shows the bear repeatedly swiping at her mother’s service dog while three other pups barked and darted around the backyard.

Home surveillance video aired by the ABC 7 television station shows the mother bear perched atop the wall, swatting at a large black dog on the ground. Two bear cubs are seen behind the bear while four smaller dogs bark and dart around the yard. Thanks to The Guardian

The moral of this story is that no matter what happens, you can’t give up on your dreams or your loved ones. You have to put everything on the line if necessary and never be afraid to do what’s right!

This often happens, when we have our backs against the wall or we run on adrenalin our subconscious takes over and we do things that we never thought possible.

This is particularly dangerous as the bear was with her cubs.