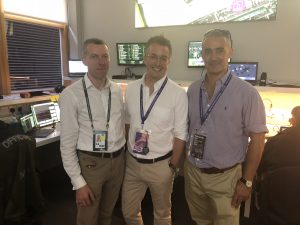 Wimbledon IBM Technology and their partnership has transformed fan engagement at the Wimbledon Tennis has been transformed from the boring, mundane world of black and white to glorious technicolour, now even the sound of the ball and the players is exciting…

As I write Serena Williams is smashing her way through the quarter finals and I feel strangely compelled to watch, but I resist, fighting the urge to switch on the TV for now…

Wimbledon IBM Technology: Behind The Scenes Of The Amazing Tech

Since my IBM bunker tour in 2015 Wimbledon has now taken full control of broadcasting and now uses Augmented Intelligence (AI) in partnership with IBM to create captivating media content during the tournament. Including the use of AI to create this year’s 150th anniversary mosaic Wimbledon poster.

Wimbledon is Leading the Way with AI Technologies

“Having started to adopt AI technologies in 2015, Wimbledon is now leading the way in harnessing the exponential power of huge sets of data to provide an ever more immersive experience.” IBM Newsroom.

The media centre was so new it was off limits to visitors this year. I couldn’t even get within 20 feet to take a picture through the glass.

A lot has happened with the IBM technology partnership at Wimbledon since my tech bunker tour in 2015 with Chris Nott (technical evangelist for IBM at Wimbledon). We were both excited about the real time AI powered contextual media updates he had pioneered that year.

My 2015 technical Wimbledon IBM bunker blog on LinkedIn is here

They achieve this by using AI and the best people-driven solutions to ensure a great customer experience, drive attention and traffic to their site, generating interest from sponsors and of course from the fans.

Achieving 201 million video views during 2017 is a 75% increase from the year before. Chris Nott seemed to think this was just because people are consuming a lot more video content than before and because Wimbledon were able to get the most relevant content out there before anyone else.

Wimbledon’s “Slamtracker” gives insights into the statistics for the fans. This year they have tried to understand fans better and have separated them into six different personas, enabling content to be tailored to specific types of people; understanding their likes and dislikes, to make it more relevant to them and their needs.

From the fan who just started watching tennis to the tennis experts among us, all benefit from receiving content that is tailored for them.

In 2018, the Official Championships Poster celebrates the 150th anniversary of The All England Lawn Tennis Club (AELTC). The Club was founded in 1868 with the first Championships being held in 1877.

The Wimbledon Mosaic poster was a brilliant innovation and when zooming in you can see the brilliance of the AI design tech, some of the pictures used were totally random as you can see below.

Over 300,000 separate images were reviewed from the entire Wimbledon photo archive, nearly 9,000 images were used to make up the Mosaic.

Creating the mosaic is a unique combination of art and artificial intelligence or rather ‘augmented intelligence.’

There is Still a Lack of Understanding Around AI

There is still a lot of misinformation about AI and what it can do; without the smart people who plan out exactly what AI does it will not do anything!

“Watson is not an employee, but a tool to assist with the meaningful work that people do, but an intelligent assistant.”

Wimbledon kicked off this week with a raft of new broadcast technology delivering coverage of The Championships.

This year’s event marks the debut of Wimbledon Broadcast Services (WBS), which has taken over from the BBC as the new host broadcast operation of All England Lawn Tennis Club (AELTC).

They now automate the creation of video highlights from a match.

They have reduced the time it takes to create highlights from 45 minutes to 5 minutes, giving Wimbledon the ultimate ‘advantage’ over their competitors. This has enabled them to #findtheadvantage gaining the advantage and picking up the viewers.

Here it works by analysing player gestures, scoring their emotions and the excitement levels of the crowd, the clapping and it also includes how animated the players are with their arms.

More data is created by other tennis professionals who watch and score the matches in the technology centre, giving them a further excitement score for that period in the match. This then gives them an overall score, generating a caption.

Wimbledon produces one hour of AI-generated coverage per day. Selecting the most exciting points using this data-driven “augmented intelligence” builds excitement for the tournament.

Broadcasters such as the BBC benefit from the interest generated for them by Wimbledon’s AI-powered highlights.

Wimbledon just uses the AI Highlights itself, utilising the speed advantage and scale it gives them.

Players Benefit from the Recordings too

Players are given highlights around 20 minutes after their match has finished. This deep analysis of their play allows coaches to work on their weaknesses before their next game.

There are many more exciting ‘nascent’ technologies being pioneered at Wimbledon, including the use of Augmented Reality within the grounds and of course Fred the AI chatbot which was launched in 2017.

Please feel free to share my blog and do contact me if you would like some help with technology, marketing or business development. I work with a select team of handpicked experts and we can assist within all areas of your business.

Thanks again to Jeremy Waite, Chris Nott and Sarah Fardon for their tours and of course the rest of the amazing IBM team for organising my trip to Wimbledon.

If you want to dig deeper into my ideas on AI you can do that here.